Posted in: Conwy | By: Conwy 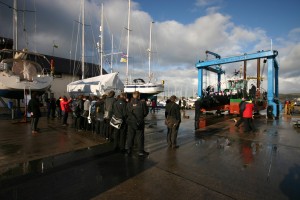 Today saw the launch of Little Orme, the brand new cutter-suction dredger to be based at Conwy Marina.

The launching ceremony was held in front of several high profile dignitaries including the Mayor of Conwy, owner/operators Quay Marinas, and partners The Crown Estates on a rather windswept day.

The dredger will herald a new start for Conwy Marina which has been dogged for a number of years by siltation. When the marina opened in the early 90s, berth-holders enjoyed an all-states-of tide access and several metres of depth under their boats at low water whilst berthed.

Sadly, due to unfounded environmental concerns, dredging the marina has been severely restricted up until this point. After years of careful analysis, however, there was found to be no effect to the local environment in the Conwy estuary by dredging. This has resulted in the Crown Estates and Quay Marinas embarking on a joint project to purchase their own dredger to get the job done.

Little Orme is a cutter-suction dredger capable of pumping siltation well out into the estuary at Conwy. In terms of the local community and business sectors, Conwys geographical location is excellent due to its proximity to the cities of Manchester and Liverpool and their surrounding populations, and will be a Mecca for boating enthusiasts whos numbers have dwindled over recent years. The impact of the dredgers use will therefore be a huge benefit to the marine industry and local businesses alike.