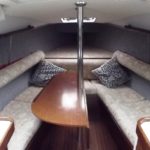 She is powered by a single 9hp Volvo diesel engine, that was fully serviced and re-built in 2015.

This Gibsea 76 is sloop rigged with Z spars aluminium alloy mast and spars (all sails are original but in usable condition).

Her interior has been refurbished.  The headlining has been replaced throughout.  She needed a lot of care after being abandoned ashore for two years before her current owner saw her potential and pedigree.

The layout is open plan with a good use of the interior space and she could actually sleep six but it would be more comfortable with four.  The aft berth is particularly large and is much lighter than you would expect due to a large glazed port in the transom.

GOOD WINDS is for sale as after completing this project the owner was tempted by another, larger sailing yacht with even better performance and two boats is never a good idea.

She has just been moved to our display area at Noss on Dart Marina but the owner took a video of her sailing just before she came ashore in 2016 which can be found at: https://www.youtube.com/watch?v=0mYNSzenx4w, to leave you in no doubt about her sailing performance.

For the full specification please use this link: https://www.networkyachtbrokers.com/boats_for_sale/Gibsea_76-171305.html/