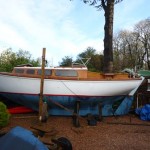 We are very happy to say that after 40 years this Bickford Checkstone 28  is ready for launch.  The Checkstone  was, designed by Jim Bickford and was named after a ledge of rock that was visible from the front window of his house on the sea-front at Exmouth Devon.  Jim served his apprenticeship at Thorneycroft’s in Southampton, and started his own boat building business in Topsham on the river Exe in 1946, In 1967 after 21 years he sold his yard and started to work from his home as a Designer and Surveyor .  The days of mass produced Glass- fibre was still a long way off, and in those days if you wanted a boat it would be designed and “built to order” out of  wood .  Exmouth had several Boat Builders in and around the Harbour, Dixon’s, Holman’s, and  Lavis’s  to name a few  they were all building pleasure and work boats in wood.    Lavis’s Yard was founded in 1875 and had built nearly 200 boats by the time they started the Checkstone all had been built in the traditional ways with quality timber. The Checkstone is the last in an uninterrupted line going back  nearly 140 years.

Most boats in those days were one of a kind and took anything up to a year to complete, being wood it was common for the owner to ask for changes to be made as the work progressed this was to be the case with the Checkstone.  The first Checkstone was built by Lavis’s Yard in 1973 for Jim himself, it was to be  a family cruiser and stayed in the family for many years, even when working   for  Wessex Cruising  as a sail training boat, it stayed with the family as Wessex Cruising was owned by the Bickford family,  Dobbin is still sailing somewhere.The second was slightly longer ,32 feet, and made into a Centre- Cockpit version, both these were built to order.

Ron Lavis  frequently sailed on Dobbin and decided with Jim’s approval and help to build another as a Spec. Between them they improved on the original design, by doing away with the lifting keel so on this version they  added another half a ton to the cast iron keel this keel is 12 feet long and 16 inches at it’s widest point., this is how they managed to achieve the 3feet 9 inches shallow draft, ideal for cruising the many rivers and beaches but giving comfortable sailing in open seas.

Ron and his father started the build in 1974/5 and worked on her for several years in between commissions, over a two year period the hull, deck and superstructure were completed, and Ron stared to look for a buyer who would finance the completion, offering to personalise the boat to the owners specific requirements.Unfortunately for Ron  Glass Fibre  was rapidly becoming the  material of choice, wooden boats could no longer compete with the Mass production methods used with the new material, Wooden Boats were a thing of the past, Glass fibre boats were off the peg, lighter, faster and cheaper.

In 1993 20 years later the Checkstone was still in the workshop, work had been done on the cabin floors and walls, a toilet, cooker and bunks had been added .  It was in November 1993 that the  “Classic Boats Magazine” did an article on Dobbin and referred to this Checkstone in the following manner “ in the corner of a Boatbuilder’s  workshop in Exmouth lies a half-completed wooden boat waiting for a loving owner, it’s pedigree is impeccable and it’s workmanship unimpeachable”. Despite this article a buyer still did not materialise and when Ron retired some 14 years after the article it  was 34 years old and was still in the yard.

The yard was taken over by two local men, but they could not make a go of it,  it was forced to close within a few years,  the Checkstone was one of the few assets of the business  and was to be sold to pay off the Companies liabilities.  The Checkstone had been known to its current owner since 1974 when he had a small fishing boat built by Ron and visited the yard  and looked at the boat and decided it deserved to be preserved for posterity, it was after all the  last of an era.  The hull was purchased and delivered to the owners home where he  could oversee the work. Ron provided all his records, drawings specifications and he even had time sheets from the 30 odd years he had been working on the project.

The project to complete this Bickford Checkstone 28 has taken 5 years she is now all but  ready to launch, 40 years after the keel was first laid.