A Thank you – from the Commodore of Conwy Yacht Club

Posted in: Deganwy | By: deganwy

The following is a “Thank you” from the Commodore following the recent events on the Conwy River and Menai Straits.

” We have had a busy month and now its quietened down I would like to thank everyone for their good work and support for the Menai Straits Regatta and the Conwy River Festival activities.

Our Race Officer for the CYC Regatta day at Beaumaris, Charles Bell, did a first class job and I thank him and his team. We have,for some years, been lucky with the weather on our day in the Straits — but not this year! Race management was therefore tricky but the right decisions were made and the starting and the race control were professionally carried out. Once more, the CYC looked like they knew what they were doing!

The catering arrangements at the Beaumaris Start Line were well up to our usual high standard and all efforts were much appreciated, especially in the miserable weather.

The Conwy River Festival had a predictably low impact on the CYC in respect to visitors to our Club. However, we were ready for all eventualities and the catering arrangements were very much appreciated by our own members after the morning’s racing on the Monday, Tuesday and Wednesday.

On the water, CYC involvement particularly from OOD’s Pam MacDonald and Rob Smith ensured good racing in the brisk weather conditions. Some of us believe that this series, for Cruiser classes has not reached its potential yet and with some work through the River Festival Committee it could be developed into a premier event with many more visiting yachts taking part. 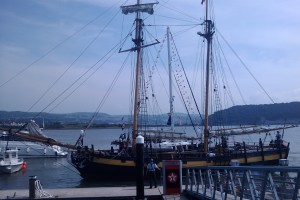 Clipper at Deganwy Marina on the Conwy River

My thanks also to the members who prepared Sior and manned it for its “Pirate Battle” on Conwy Quay Day. I don’t know how much entertainment value we provided for the tourists with our water balloon-firing “trebuchet” but I have to admit I had a lot of fun with it!

Finally, the River Taxi project has got off to a good start. CYC involvement with Sior has so far been restricted to what our insurance allows it to do. It will depend on demand for the service but we are reviewing the implications of taking it up to a higher level, probably next season. “