All Feeling Boats For Sale

In the early 1980s, the Kirie Yacht Brand was a well respected and long-established French boatbuilder. They sold the company to American buyers who developed a very modern and responsive Iron Keel Yachts range. The name of Kiri was lost, and the new brand would be called Feeling.

The first Feeling 10.40 Yacht sailed from France to New York single-handed. She was knocked down several times during the passage by hurricane winds but survived unscathed. Immediately after this, she was exhibited at the New York boat show. The Feeling 10.40 Yacht went on to be awarded the 1985 American boat of the year.

The Feeling Yacht history began with the designers determined to produce an attractive Yacht. The yacht had to be fast, easy to sail, yet an ocean-going model. The result of their design was to produce a yacht that met all expectations with a large interior not seen before on a yacht of this size. A feature of the design also is the sense of space and luxury down below. This feeling of space is much improved by the use of light Elm and beautiful fabrics. Feeling Yachts were the first production company to use light coloured woodwork for cabins, this is now commonplace in the market, along with the open-plan saloon replicated in many new boats today.

The Kirié Feeling 396 DI was designed to slip onto that beach like a catamaran. The magic was accomplished employing a massive, lifting, keel-like centreboard that reduces 7’4" of the draft to an easy to reach 2’11". 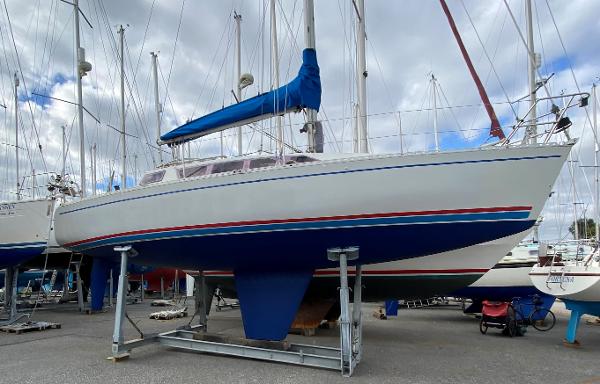