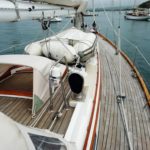 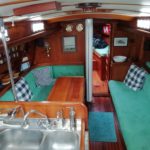 Frers and Cibils ( F & C ) 44 for sale.   Built by Alberto Cibil in Buenos Aires, to a design by German Frers in 1983. The conception of the F and C 44 class of yachts began in the cockpit of Recluta 111 during the Fastnet race of 1973 when she was the top scorer in the Admirals Cup series that year. The designer German Frers was aboard monitoring the performance of his successful creation. Frers had by this time left Sparkman and Stephens and set up on his own in Buenos Aries. His father commissioned the first of a revised version – a gentleman’s yacht of high quality designed with the concept of providing luxury performance cruising. The artistry of the design led the ‘Frers and Cibils’ yard in Buenos Aires to commence production and about fifty of the class were completed between 1978 and 1984.  WINTER was #46 and benefited from the design modifications of the later boats.  Importantly these relate to revised engine position and configuration as well as re-designed chain plate installation to main and mizzen masts.

The Frers and Cibils ( F & C ) 44 is a fast, beautiful, go anywhere Blue Water cruising yacht with a strong fiberglass hull and deck with teak overlay.  The interior is finished with impeccably crafted mahogany.

WINTER has been stored under cover for the winter season when in the UK and was copper coated in 2015.  THis F and C 44 had a new engine installed in 2016 and this still has very low running hours, last serviced in April 2018 prior to being placed for sale. Northsails fully battened mainsail and mizzen were fitted in 2017 and are as new.  There was an extensive re-fit in 2006- 2007 when all the electronic systems were renewed.