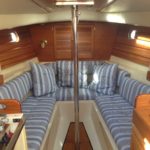 This Bermudan rig version of the Crabber 24 results in less rope in the cockpit and better upwind performance than the gaff rigged versions.

She has an 18hp inboard engine, last serviced in 2017 and has additional sound proofing in the engine bay.

Adventurous Cornish Crabber owners have sailed them long distances, SHAMROCK has been cruised across the channel and along the South West Coast and the owners have maintained a log since launch.

This version of the Crabber 24 has a separate heads compartment to port and a chart table that ingeniously covers the sink.  The 2- burner hob with oven and grill is opposite.

SHAMROCK is a good example of this popular family cruising yacht built by Cornish Crabbers in Cornwall.  She has been in the current ownership for three years and has always been lightly used.

She has all the basic navigation and anchoring and mooring equipment as well as a cockpit table, cushions, sprayhood and over boom cockpit cover.

The interior is wood panelled with blue upholstery and fixed wooden flooring. Forward is a large locker which will hold all sails in their sail bags.  The varnished wooden table can be lifted to the cabin roof and secured for storage.

The cockpit is deep and comfortable and has lockers on both sides and stowage for two gas bottles aft.