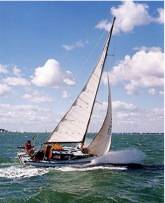 An Enduring Charm about the SCOD is their strength, beauty and History. They still have their own class in Cowes week and compete fiercly for the Teapot trophy. But whatÃs all this about a Teapot trophy? asks Vanessa Bird. Youd think that on a skiing holiday at the foot of the Eiger in Switzerland, miles inland, boats would be far from your mind, but this is said to be the birthplace of the South Coast One-Design (SCOD). Six members of the Island Yacht Club, Isle of Wight, on a skiing trip in 1954, came up with the idea of the SCOD while propping up the bar. It proved to be more than just beer talk, though, because on their return they approached designer Charles Nicholson and, in 1955, the lines of the SCOD were laid down. The sailors wanted an inexpensive racing/cruising boat for four people. Nicholsons answer was a simple design  a 25ft 11in (7.7m) long-keeled yacht that had strong hull sections forward and a delicate run aft. Construction was to be simple and they had to be cheap too, so enough boats could be built to generate interest in the class. The first six SCODs were built at Clare Lallows yard in Cowes and thereafter at various yards along the South Coast, including: Camper & Nicholsons, Woodnutt & Co, R&W Clark, W Souter and David Cheverton. The main builder of SCODs, however, was Burnes Shipyard in Bosham, Sussex, who, between 1956 and 1967, built 62; over half of the class. As competitive racing boats the SCODs are not to be sneered at, and they helped to resurrect interest in racing in the Solent after the World War II. In 1956, a year after the first SCOD was launched, the top six prizes at the Round the Island Race went to SCODs, and there is still a strong fleet of half a dozen boats racing in the Solent. During Cowes Week the boats race for the Teapot trophy, a pewter teapot which was first presented by Yachting World in 1990. The trophy was established after Dick Johnson, the commentator for Cowes Week, suggested that after the SCODs had crossed the start line, their crews went down below to make a cup of tea. SCOD' can cruise afar! How far south? The SCODs are so well travelled that one is now based in Australia. SCOD value?

Enquire About This SCOD (South Coast One Design)