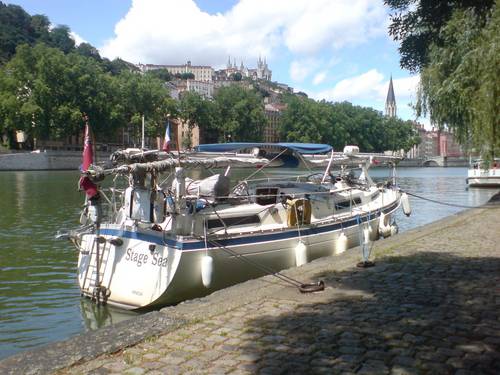 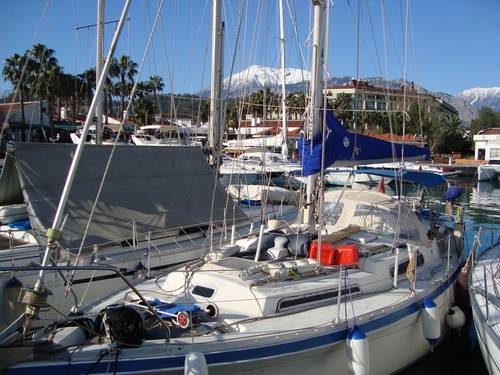 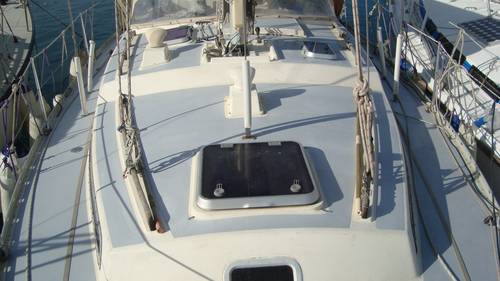 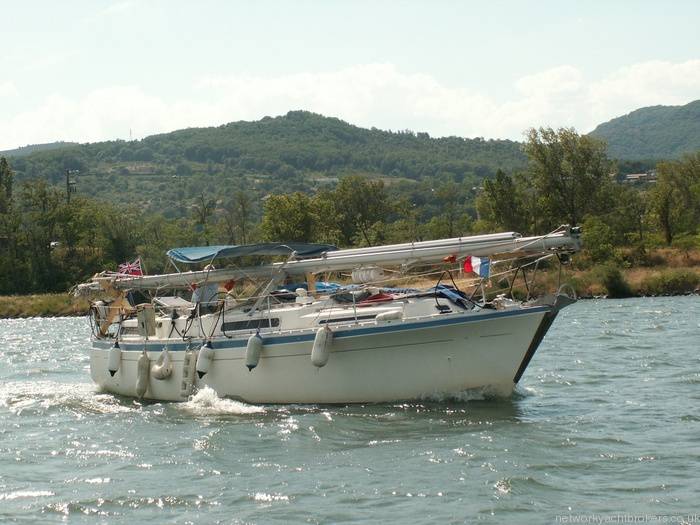 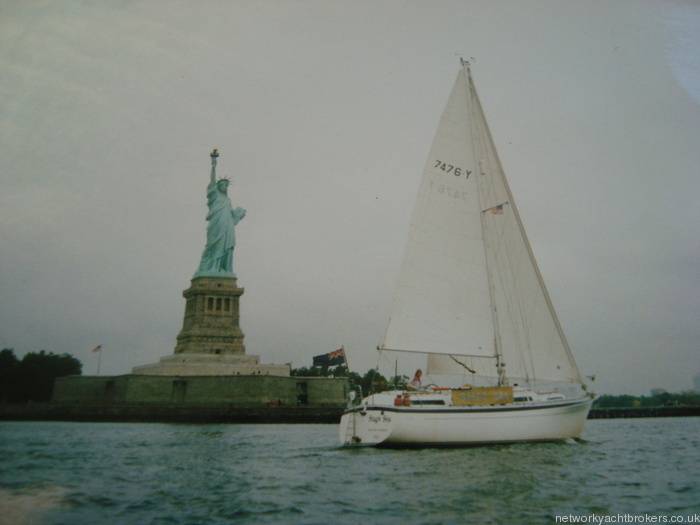 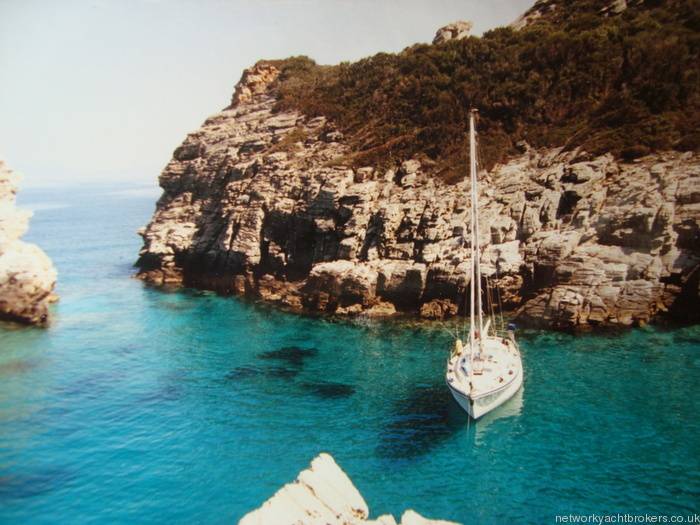 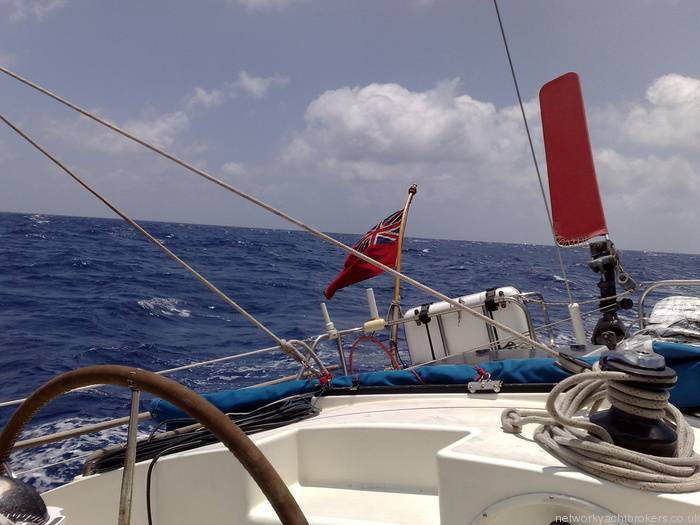 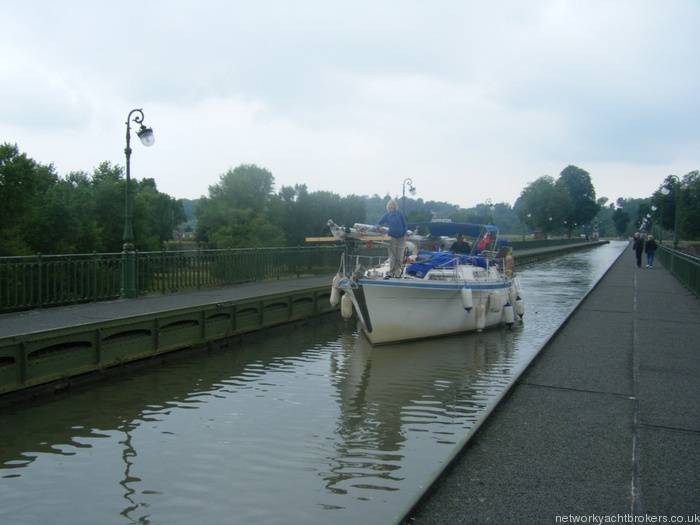 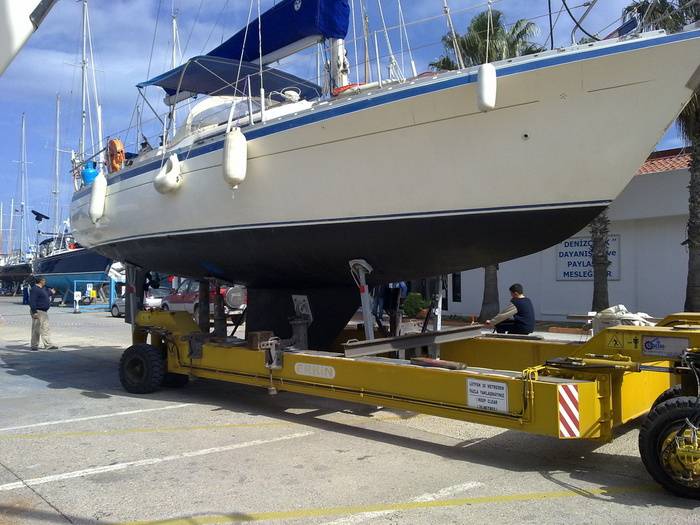 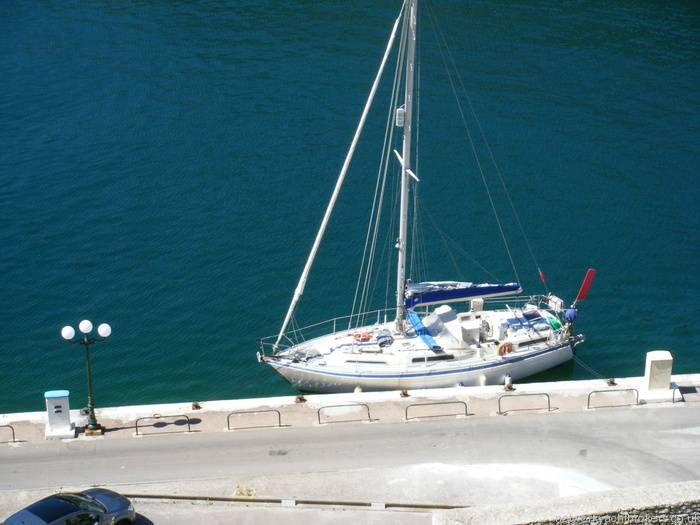 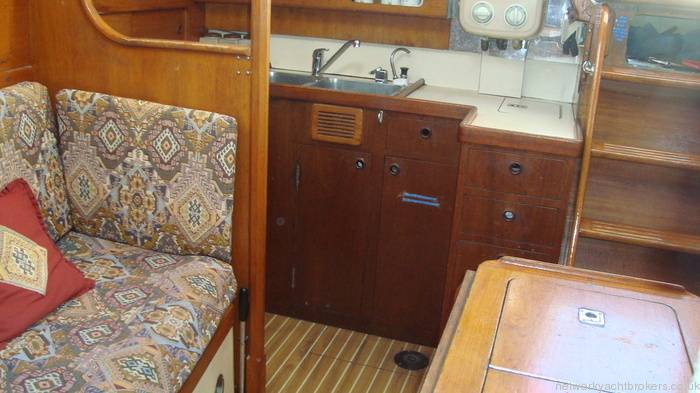 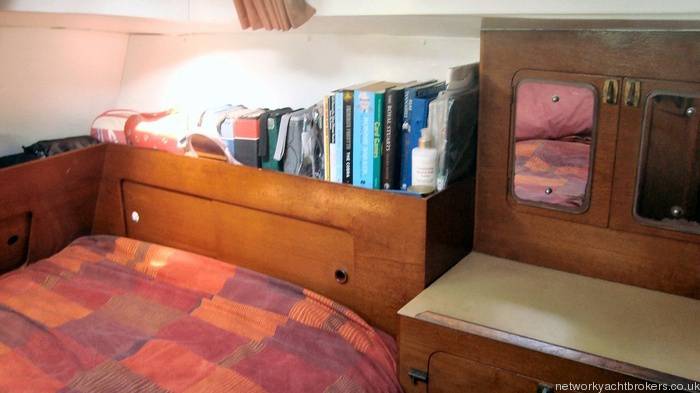 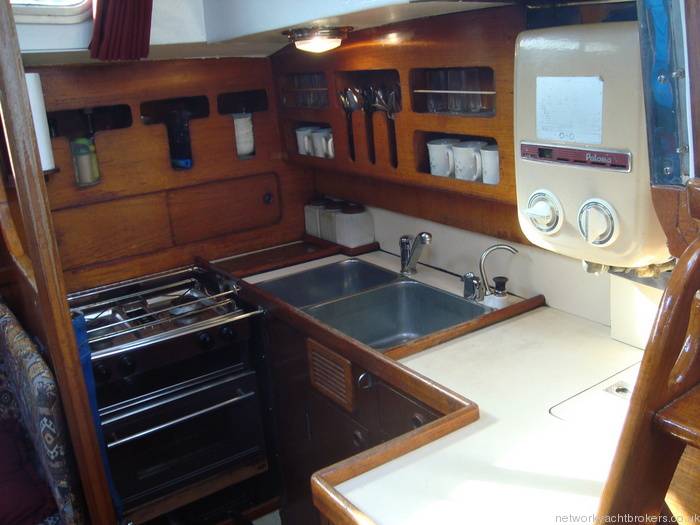 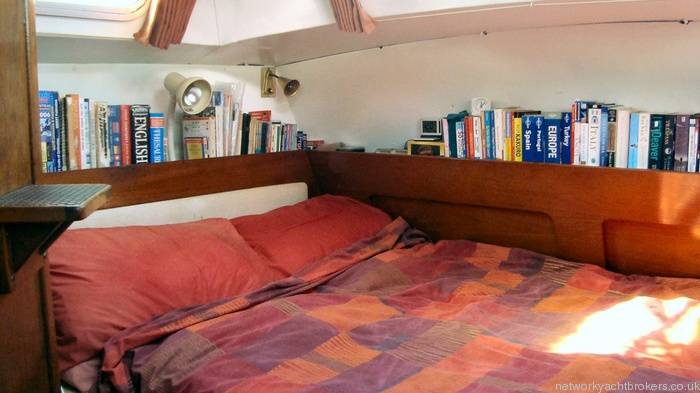 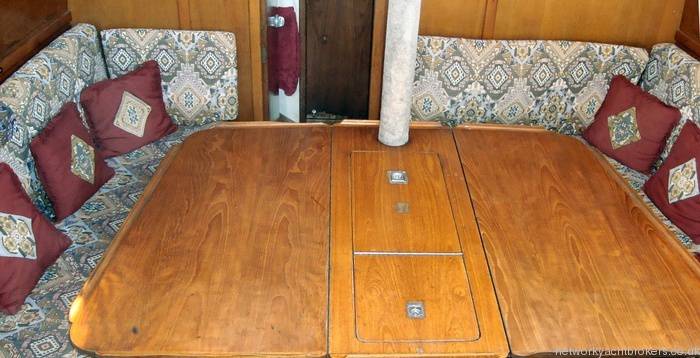 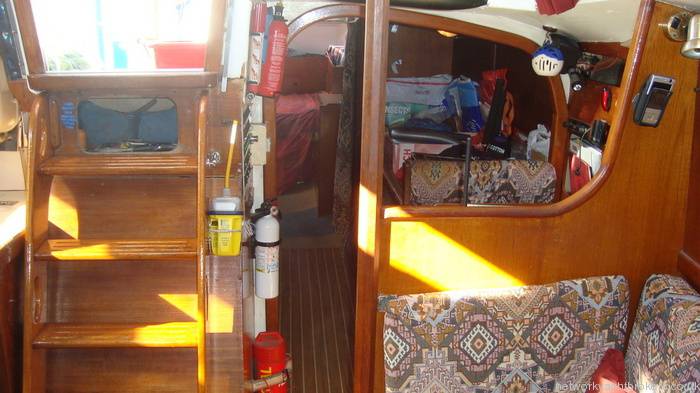 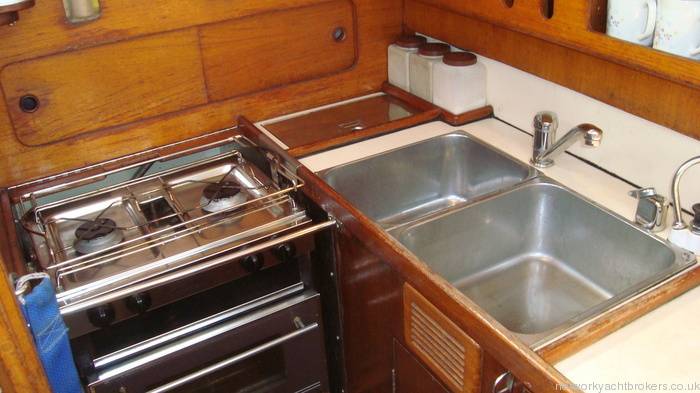 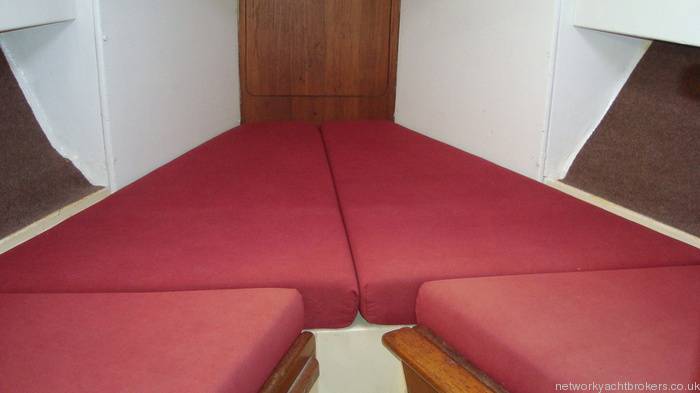 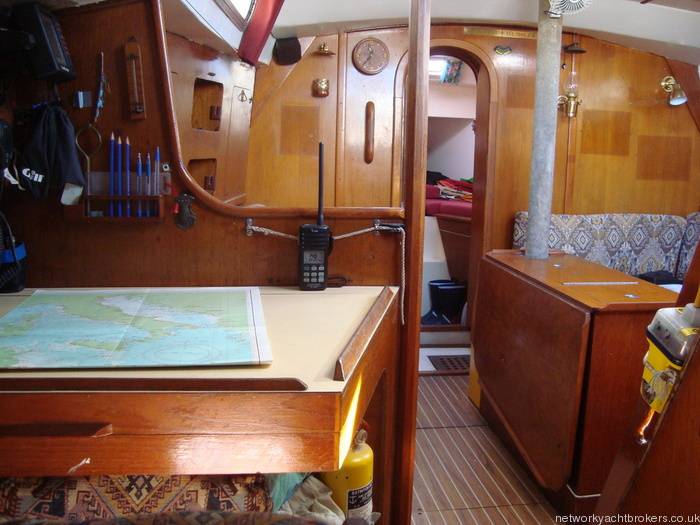 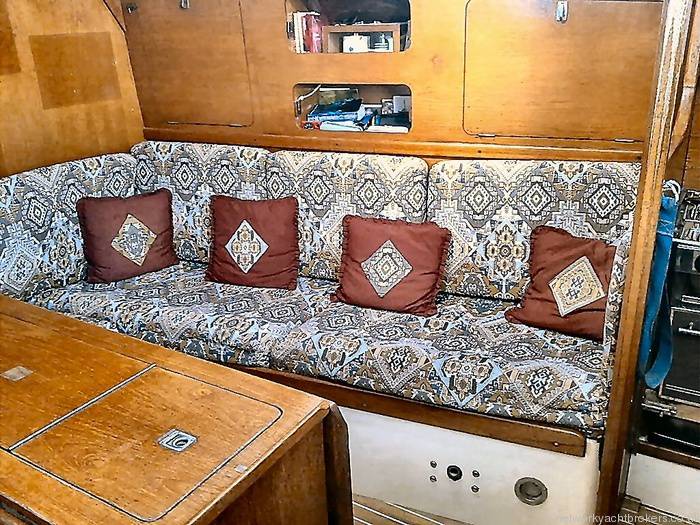 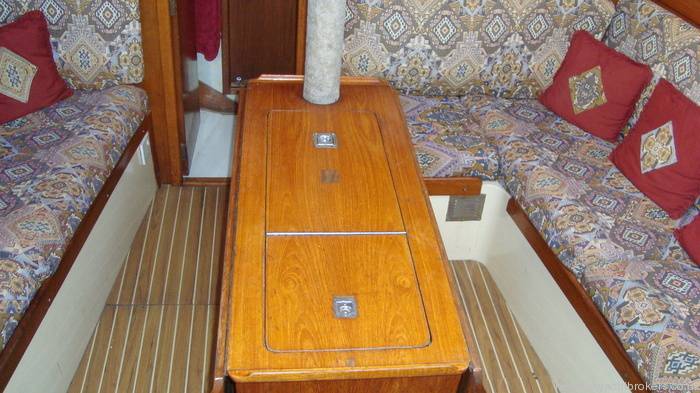 Compared with many other 11 metre/ 36ft yachts, the Moody design provides very spacious, comfortable accommodation and the full standing head room.Stage Sea is an sea boat quite simply a joy to sail. PX available finance available

Stage Sea sleeps 7 in three cabins.
The master double cabin, with ensuite heads, hand basin and shower, is behind the centre cockpit. This is accessed through a low corridor from the main saloon, which affords a much greater level of privacy and space than many other layouts. The double bed has a Dunlopillow mattress with coir base to prevent condensation.

A further double cabin fills the bow, with heads, hand basin and shower adjacent.
The saloon seats up to 8 on two ‘sofas’ (can also be used as bunks) either side of the large central table with its two sizeable fold-down leaves. The centre of the table houses the capacious 70L custom-built fridge, designed for us with very thick insulation.
The galley and chart table areas sit either side of the main companionway.

Our bespoke galley:
The custom designed and professionally hand-built galley is sufficiently well equipped for liveaboard cruising and entertaining!

EXTERNALLY
The central cockpit has wheel steering and a detachable solid teak table for drinkies. There is a spray hood, and a bimini with zip-on extension pieces to turn it into a long sun-awning, or to give extra protection against sun, wind and rain.

Sails:  Main, genoa and storm jib by North sails – new in 2008.
Also Spinnaker and pole, No2 genoa, and reserve storm jib by other makers

ENGINE:     Beta 38 HE, based on the renowned Kubota diesel, new and professionally installed in 2009. Only 806 engine hours as at 21 Nov 2011.Top-of-the-range illuminated engine control panel, shows revs ,volts, temperature and oil pressure, with warning lights and sounds.

POWER SUPPLY:    3 x 12V batteries, charged by 65A Engine alternator, or Sinergex Pure Charge intelligent and fully automatic 3-stage battery charger, or Aquair 100 – a dual capability generator which can be either wind or water driven.
Sterling battery charger, new in 2009

ANCHOR WINDLASS:    Lofrans Tigres 1200W (can be operated from the helm or the foredeck)

ANCHORS:    Main Bugel anchor with 60m chain, additional 40m in locker (5/8th inch). Aft, there are 2 Danforth-type anchors, one routinely rigged in a purpose-built stern cradle ready for Mediterranean-style mooring.  A Bruce is stowed below.

2HEADS: one fitted to holding tank (essential if you have transatlantic plans)

Enquire About This Moody Moody 36